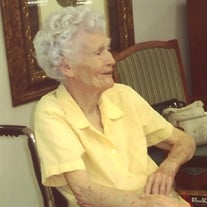 Mrs. Betty Butler Stringer, 87, passed away on July 15, 2018, at OCH Regional Medical Center in Starkville. Mrs. Betty was born June 16, 1931, in Starkville, the daughter of the late Oscar Hartford and Sadie Eugenia Hammond Butler. Mrs. Betty was Valedictorian of her graduating class at Brooksville High School in 1949, where she was a star athlete in basketball and track. During her high school years she played the piano for worship services at her church. After high school, she attended Blue Mountain College where she graduated with honors. Mrs. Betty graduated from the Southwest Baptist Theological Seminary in Ft. Worth, Texas. She married Henry Kirvin Stringer on August 21, 1965, in Grand Island, Nebraska, and he passed away May 24, 2015. Both she and Henry spent their married life traveling on the mission field spreading the Gospel of Jesus Christ. While on the mission field, Betty was an elementary school teacher. After retiring back to Starkville, Betty was a member of First Baptist Church in Starkville, but attended Adaton Baptist Church near their home. In addition to her parents and husband, Betty was preceded in death by her 2 Sisters: Sarah VonKanel and Ruth Yeates and 3 Brothers: Eugene, John, and Al Butler. Memorial services will be Tuesday, July 24, 2018 at 3:00 P.M. at Adaton Baptist Church in Starkville with Reverend Clifton Curtis officiating and assisted by Reverend Tom Daniel. Burial will follow in Delhi Cemetery in Delhi, Oklahoma. Calvert Funeral Home of West Point is honored to be entrusted with the arrangements. Survivors include Her Two Step-Daughters, Kay Watson (Skip) of Denver, CO and Susan Heinrichs (Bob) of Austin, TX; Two Sisters-in-Law: Joan Taylor (Clay) of Starkville and Selma Woodring of Baton Rouge, LA; Her Niece and Caregiver over the last several years: Charlotte Simmons Aultman of Starkville and a host of other Nieces and Nephews and Great Nieces and Great Nephews. Memorials may be made to The Gideons International, P.O. Box 661, West Point, MS 39773. Visitation will be Tuesday from 1:30 – 3:00 P.M. at Adaton Baptist Church in Starkville. Friends may leave an online condolence at www.calvertfuneralhome.com

The family of Mrs. Betty Butler Stringer created this Life Tributes page to make it easy to share your memories.

Send flowers to the Stringer family.