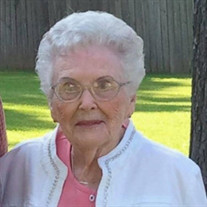 Mrs. Dimple Martin Brasher, 96, passed away on September 29, 2019 at North Mississippi Medical Center in West Point. Mrs. Dimple was born on June 15, 1923, in Holcomb, the daughter of the late Luther Lamar and Genera Bell Martin. She worked as a Wildlife Management Officer for the United States Forestry Service in Yazoo City and was a Supervisor for Grenada Industries in Grenada. She was a Worthy Matron of the order of the Eastern Star Martha Chapter #53. She enjoyed collecting music boxes, flower gardening, and cooking. She was an avid and accomplished seamstress. She came to West Point in 1981 from Yazoo City. She was a loving mother, grandmother, great-grandmother, and friend. She was a member of Calvary Baptist Church in West Point. She married Dewel Gail Brasher, Sr. on September 12, 1942, in Water Valley and he predeceased her on December 24, 1998. Visitation will be Tuesday, October 1, 2019, from 5:00-7:00 P.M. at Calvert Funeral Home. Graveside services will be Wednesday, October 2, 2019, at 11:00 A.M. from Greenwood Cemetery in West Point with Reverend Roy Myers officiating. Calvert Funeral Home of West Point is honored to be entrusted with the arrangements. Survivors include her two daughters, Shirley B. Romanowski (John) of West Point and Carole B. Sorenson (David) of Starkville: son, Dewel G. Brasher, Jr. (Karen) of West Point: three grandchildren; David A. Brasher of West Point, Jessica Romanowski of Smithville, New Jersey, and Lindsey Schauer (Dan) of Davenport, Florida: great-grandson, Logan Schauer of Davenport, Florida and special caregivers: Willie Bell Cox, Lisa Gandy, and Maggie Pernell, all of West Point. Memorials may be made to Calvary Baptist Church, 282 McCord Street, West Point, MS 39773. Friends may leave an online condolence at www.calvertfuneralhome.com

The family of Mrs. Dimple Martin Brasher created this Life Tributes page to make it easy to share your memories.

Send flowers to the Brasher family.