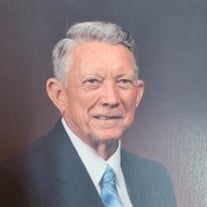 Master Chief Petty Officer Hubbard Smith Wooten Jr. passed away on September 3, 2021, at the age of 92. He is survived by his wife, Peggy Wooten, sister Dorothy Hogue, brother Ray Wooten, and two children Hubbard (Elizabeth) and James, and daughter in law Janet Wooten. He has 3 surviving grandchildren, Kathy, Jason, and Lori plus 9 loving great grandchildren. He was preceded on his journey by his parents Hubbard and Ruth Wooten, son Gerald Wooten, and grandchild Andy Bennett. MCPO Wooten is a veteran of 30 years in the United States Navy. His decorated career included tours in the Marshal Islands, Florida, Puerto Rico, the USS Forrestal, and various instructor positions in Florida, California, and Tennessee. His final tour was as the Command Master Chief of the Naval Air Maintenance Training Group in Memphis, Tennessee. In 1978 he returned to his family home of Cedar Bluff where he continued his varied careers including work at Phelps Dodge and positions in the West Point Public Works Department. In addition to his demanding work schedule he became a certified Beef Master cattle breeder continuing to farm throughout his retirement. In 1993 he was selected the Cattleman of the Year for Clay County. He further was an active member of Cedar Bluff Methodist Church. A graveside service will be held on Thursday, September 9, at 11:00 AM at the Cedar Bluff Cumberland Presbyterian Cemetery in Cedar Bluff. In lieu of flowers please donate to Cedar Bluff Methodist Church, c/o Pam Pearson, P.O. Box 82, Cedar Bluff, MS 39741 or your personal charity.

The family of Mr. Hubbard Smith Wooten Jr created this Life Tributes page to make it easy to share your memories.

Send flowers to the Wooten family.