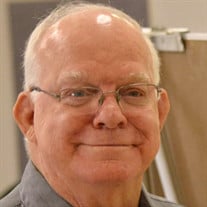 Mr. James Ronald Chunn, 73, looked peacefully upon the face of Jesus and entered into his eternal home on August 3, 2018, at his home near Columbus surrounded by his loving family. He never once feared death. Mr. James was born January 22, 1945, in Bastrop, LA, the son of the late James “Jim” Henry and Zona Pearl Humphries Chunn. Mr. James worked for the International Paper Company in Bastrop, LA, for over 20 years before transferring to Weyerhauser in Columbus in 1982 to begin the start-up of the plant. He retired from Weyerhauser where he worked in the Finishing and Shipping department. Mr. James was known to be hard worker. He was a loyal and faithful member of Faith Baptist Church in West Point, where he sang in the choir and was instrumental in organizing a Gospel singing every quarter at the church. He was a talented and accomplished harmonica player that enjoyed all music and enjoyed singing. Mr. James was an avid outdoorsman that enjoyed deer and rabbit hunting, fishing, and archery. He was a member of the Big Horn Hunting Club. He also excelled in football, baseball, and track.. He was a huge "L.S.U." fan and enjoyed all sports. He was very soft spoken, but a man that meant what he said and said what he meant. He married Anne Sloat Chunn on March 7, 1964, in Bastrop, LA, and they were married for 54 years. In addition to his parents, he was preceded in death by a Brother: John Kenneth Chunn. “Go Rest High on the Mountain Daddy, for your work on Earth is done.” Go to Heaven a shouting, Husband, look for the Father and His Son. We will see you soon, Papaw. Until we meet again…….. Funeral services will be Tuesday, August 7, 2018, at 2:00 P.M. at Faith Baptist Church in West Point with Reverend Ben Yarber officiating and assisted by Reverend John Sevier and Reverend Jeff Morgan. Burial will follow in Memorial Garden Cemetery in Columbus. Calvert Funeral Home of West Point is honored to be entrusted with the arrangements. Survivors include Wife Anne Chunn of Columbus; Daughter, Amy Chunn Clark (Robbie) of Columbus; Son, Gregory Chunn of Acworth, GA; Three Grandchildren: James Alexander Chunn of Ft. Leonard Wood, MO, Kathryn Anne Chunn of Acworth, GA and Gracyn Hope Clark of Columbus; Two Step-Grandchildren: BaiLee Clark of Mantee, and Lane Edward Clark of Starkville; Two Sisters, Kathleen Rouse of Vicksburg, and Carolyn Lear of Conroe, TX; Sister-in-Law: Marcia Chunn of Bastrop, LA; and his Uncle: J.B. Humphries of Delhi, LA and Several Nieces and Nephews. Pallbearers will be Michael Rouse, Danny Rouse, Ronnie Chunn, Walter Moore, Lane Clark, Bill Ladd, Al Christopher and Jimmy Johnson. Honorary Pallbearers will be Shannon Clardy, Stanley Bramlett, Jimmy Davidson, Andy Austin, Doug Hanks, Justin Rouse, Gene Rouse, Members of Big Horn Hunting Club, His Many Friends at Faith Baptist Church, and the Nurses and Staff of Legacy Hospice. Memorials may be made to Faith Baptist Church, 1834 East Church Hill Road, West Point, MS 39773 Visitation will be 5:00-8:00 P.M. Monday at Calvert Funeral Home and from 12:00-2:00 P.M. Tuesday at Faith Baptist Church in West Point. Friends may leave an online condolence at www.calvertfuneralhome.com

Mr. James Ronald Chunn, 73, looked peacefully upon the face of Jesus and entered into his eternal home on August 3, 2018, at his home near Columbus surrounded by his loving family. He never once feared death. Mr. James was born January 22,... View Obituary & Service Information

The family of Mr. James R. Chunn created this Life Tributes page to make it easy to share your memories.

Mr. James Ronald Chunn, 73, looked peacefully upon the face of...

Send flowers to the Chunn family.