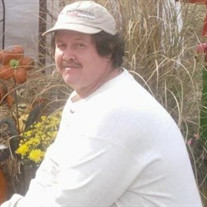 Mr. James Richard "Ricky" Doss, 58, passed away on September 7, 2021 at North Mississippi Medical Center in Tupelo. Ricky was born on February 10, 1963, in West Point, the son of the late Henry and Shirley Morris Doss. In the words of his daughter, Melissa, "My daddy lived life to the fullest. He always done what he wanted when he wanted whether it was right or wrong. He loved with his whole heart. He would give the shirt off his back to anyone. He was devoted to his work, friends, and family. He loved the lake and he loved to fish. This town,, Our world, Will definitely not be the same without Ricky Doss." Ricky married Tina Pace Doss on August 18, 1985 in West Point. He was of the Baptist faith. In addition to his parents, he was preceded in death by a daughter, Misty Doss. Visitation will be Sunday, September 12, 2021 from 1:00-2:00 P.M. at Calvert Funeral Home. Funeral services will follow at 2:00 P.M. from Calvert Funeral Home Chapel with Brother Tim Westmoreland officiating. Burial will follow in Memorial Garden Cemetery in West Point. Calvert Funeral Home of West Point is honored to be entrusted with the arrangements. Survivors include his wife, Tina Doss of West Point: two daughters, Melissa Beckner (James) of West Point and Kimberly McWilliams (Hoon) of Prairie: four grandchildren; Autumn Beckner, Kayla Boswell, Carson McWilliams, and Kinsley Pierce: two sisters, Sherry Westmoreland (Tim) of Sulligent, Alabama and Janice Nevels of Colorado Springs, Colorado. Pallbearers will be Jimmy Bryant, Wayne Doster, Michael Langley, Taurrence Pierce, David Pace, and Scottie Pace. Honorary Pallbearers will be James Meyers, Stephen Carpenter, and Louis McWilliams. Memorials may be made to St. Jude Children's Research Hospital, 262 Danny Thomas Pl, Memphis, TN 38105 or to the Charity of the Donor’s Choice. Friends may leave an online condolence at www.calvertfuneralhome.com

Mr. James Richard "Ricky" Doss, 58, passed away on September 7, 2021 at North Mississippi Medical Center in Tupelo. Ricky was born on February 10, 1963, in West Point, the son of the late Henry and Shirley Morris Doss. In the words of his... View Obituary & Service Information

The family of Mr. James Richard "Ricky" Doss created this Life Tributes page to make it easy to share your memories.

Send flowers to the Doss family.