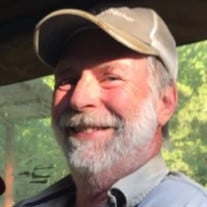 West Point, MS - James Gregory "Greg" Vest, 59, passed away, on March 26, 2021 at his residence, in the Siloam community. Greg was born December 4, 1961 in West Point to the late Mamie Lee Blankenship Vest and James Horton Vest, Jr. He was self employed for 5 years, owning his own company Vestech. He was of the Baptist faith. He was a member of the Mississippi National Guard. Greg married Margaret Jo Alice Wray Vest April 15, 2018, in the Siloam community. Greg was a loving husband, father, grandfather and friend. One of his favorite pastimes was taking the kids fishing. Being outdoors was very special to him. Early on he enjoyed horseback riding and taking his girls to horse shows. He was an avid grill man who also liked singing karaoke and just being around people and having fun. He could be found at the dirt track watching races as well as Nascar. Greg had a contagious smile and he will be missed by many. A memorial graveside service will be held in Enon Baptist Cemetery in the Big Springs community at a later date. Calvert Funeral Home of West Point is in charge of arrangements. Survivors include his wife Margaret Jo Alice Wray Vest of West Point; two daughters, Wendy Vest Young of Louisville and Lacey Vest Williams (Bubba) of Mathiston; three grandchildren; Hunter Williams, Reagen Williams and Brayden Young, five sisters; Gayle Duncan (Clovis) of West Point, Patricia Thompson (C.B.) of West Point, Norma Ellis (Keith) of West Point, Etta Blair (Allen) of Petal, Kim Allen (Tommy) of Maben; one brother, William "Bubba" Vest (Reba) of West Point and a host of nieces and nephews. Along with his parents, Greg was preceded in death by his paternal grandparents, James Horton and Ella Mae Vest and maternal grandparents, Albert Ellis and Evangeline Marie Blankenship. Memorials may be made to Enon Baptist Church, c/o Margie Cartee, 17708 Highway 50 West, Cedar Bluff, MS 39741 or to American Liver Foundation, P.O. Box 299, West Orange, NJ 07052. Friends may leave an online condolence at www.calvertfuneralhome.com

West Point, MS - James Gregory "Greg" Vest, 59, passed away, on March 26, 2021 at his residence, in the Siloam community. Greg was born December 4, 1961 in West Point to the late Mamie Lee Blankenship Vest and James Horton Vest, Jr. He was self... View Obituary & Service Information

The family of Mr. James Gregory "Greg" Vest created this Life Tributes page to make it easy to share your memories.

Send flowers to the Vest family.