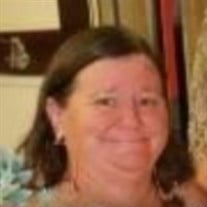 Durant, MS - Lisa White Watson, 56, died on December 24, 2021 at Baptist Memorial Hospital in Columbus. She was born November 13, 1965, in West Point to the late Lillie Sue Boyce and Charles Daniel White. Lisa worked as an Electrical Assembler at Pep Industries in Houston. She was a member of Pheba Baptist Church. She married Fred Watson on November 13, 2012, in Attalla County, MS. Lisa was a loving wife, mother and grandmother. She enjoyed caring for her family and spending time with her grandchildren. She was preceded in death by her parents. Graveside funeral services will be Tuesday, December 28, 2021 at 2:15 from the graveside with the Brother Terry Rhodes officiating. Burial will follow in Pheba Cemetery in Pheba, MS. Calvert Funeral Home of West Point is in charge of arrangements. Survivors include her husband Fred Watson of Durant, daughter; Lillie Dickson (Sam) of Durant, 2 grandchildren; Samantha and Leslie Watson, one brother; Danny White (Merline) of Pheba. Pallbearers will be Robert Parker, Rob Parker, Cody Parker, Tommy Millsaps, Andy Morris, Joe Salmon. Memorials may be made to Pheba Cemetery Care Fund, c/o Becky McNeel, P.O. Box 23, Pheba, MS 39755. Visitation will be 15 minutes prior to the service. Friends may leave an online condolence at www.calvertfuneralhome.com

The family of Mrs. Lisa White Watson created this Life Tributes page to make it easy to share your memories.

Send flowers to the Watson family.