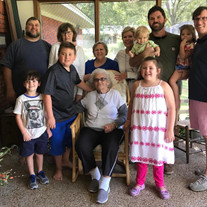 Mrs. Mary G. Hurt, 91, passed away on December 7, 2021, at Trinity Assisted Living in Columbus. Mary was born on September 5, 1930, in Clay County, the daughter of the late Ira and Minnie Montgomery. Mary worked for Babcock and Wilcox in West Point for 15 years. Mary was always a hard worker. She was known for keeping everything really clean. She was proud of her yard. Her brother, Vern, always joked her about running around with a bag catching the leaves before they hit the ground. She raised four children alone, and she loved all of them more than herself. She loved her grandchildren and her great-grandchildren, and they really loved their Mawmaw Hurt. She was a member of Hebron Baptist Church. She married George Hurt on August 28, 1971, in West Point, and he predeceased her on May 19, 1995. In addition to her parents and husband, she was preceded in death by a son, Roger N. Hill and a grandson, Toby Taylor. Visitation will be on Sunday, December 12, 2021, from 1:00-2:00 P.M. at Calvert Funeral Home. Funeral services will follow at 2:00 P.M. from Calvert Funeral Home Chapel with Brother Andy Parrish officiating and assisted by Dr. James Towery. Burial will follow in Memorial Garden Cemetery in West Point. Calvert Funeral Home of West Point is honored to be entrusted with the arrangements. Survivors include her three daughters, Linda Taylor (Willie) of West Point, Carol Lucius (Donnie) of Senatobia, and Patsy Hill of West Point: three grandchildren, Todd Taylor (Stephanie) of Spokane, Washington, Cory Lucius (Jamie) of Starkville and Brandon Lucius (Amy Lauren) of Ringgold, Georgia, ten great-grandchildren; two sisters, Clara Hampton of West Point and Sue Thomas of Seattle, Washington, and a brother, Sammie McNeel (Jennie) of West Point. Pallbearers will be Willie Taylor, Donnie Lucius, Todd Taylor, Cory Lucius, Brandon Lucius, and Winston Way. Honorary Pallbearers will be Keith Hall, Chad Scott, Tracy McKee, Brother Dickey Bryan, Joel Smith, Julian Patton, Ann Holman, Dr. Edmund Miller, Dr. Brett Brown, the Nurses and Friends at Trinity Assisted Living, her sitters at Trinity, and the Nurses at Encompass Hospice. Memorials may be made to American Cancer Society, P.O. Box 8217, Jackson, MS 39215 or to American Heart Association, P.O. Box 16808, Jackson, MS 39236. Friends may leave an online condolence at www.calvertfuneralhome.com

Mrs. Mary G. Hurt, 91, passed away on December 7, 2021, at Trinity Assisted Living in Columbus. Mary was born on September 5, 1930, in Clay County, the daughter of the late Ira and Minnie Montgomery. Mary worked for Babcock and Wilcox in West... View Obituary & Service Information

The family of Mrs. Mary G. Hurt created this Life Tributes page to make it easy to share your memories.

Send flowers to the Hurt family.