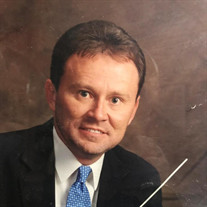 Starkville, MS - Max Timothy “Tim” Avant, age 61, was born on April 30, 1959, and passed away on February 2, 2021. Tim’s passion was his love for music and band. He loved each and every student he taught. While attending MSU, Tim was drum major for “The Famous Maroon Band” as well as being their Auxiliary Coordinator for the past 5 years. He taught in the Mississippi Public School Systems for 26 years and retired as Director of Bands from the Louisville School District in 2014. His teaching career began in McComb, followed by stops at Southwest MS Community College, Kosciusko, Amory, West Point and Stone County. Having taught on all academic levels from kindergarten to college, his primary focus was middle school and high school band. His groups consistently received superior ratings in marching, concert and sight-reading. After graduating from West Point High School in 1977, he received his Bachelor of Music Education and Master of Music Education degrees from Mississippi State University. He served on the staff of the Florida All-Star Marching Band, Mississippi Lions All-State Band in 1992 and was Visual Coordinator for the 2006 International Champion Mississippi Lions All-State Band. In 1994 and 1995, he served as Visual Coordinator for Itawamba Community College’s WGI Southern Regional Finalist Indoor Color Guard. Tim was a member of the National Band Association, Mississippi Bandmasters Association and Phi Mu Alpha Sinfonia. He served as an officer for the Northeast Mississippi Jr. High Band Directors Association, a former member of the Gulf Coast Band Directors and East Mississippi Band Directors Association. He adjudicates marching band, color guard and drum major throughout the Southeastern United States. Tim is survived by his brother, Clint Avant and wife Jennifer of West Point; sisters, Tina Avant of West Point and Lynn Nance and husband Delynn of Caledonia; nieces, Stephanie Smith, Megan Pennington (Colby); nephews, Zack Avant (Leah) and Clay Nance (Nikki) and a host of great nieces and nephews. Tim was preceded in death by his parents, Max and Peggy Avant. A graveside Celebration of Life Service will be held Monday, February 8, 2021 at 2:00pm from Odd Fellows Cemetery, Starkville, MS. The Famous Maroon Band will serve as honorary pallbearers. Calvert Funeral Home is honored to be entrusted with the arrangements.

The family of Max Timothy "Tim" Avant created this Life Tributes page to make it easy to share your memories.

Send flowers to the Avant family.