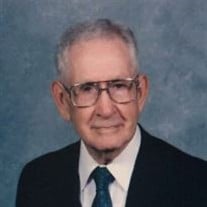 Samuel B. Bigham, age 99, died Wednesday, August 8, 2012 at Dugan Memorial Home in West Point. He was born in Pontotoc, Miss., to the late Dr. Eugene N. Bigham, Sr., and Elizabeth (Lizzy) Sample Bigham. His wife, Emmy Ruth Smith Bigham, preceded him in death in 1984. He was also preceded in death by his brother, Eugene N. Bigham, Jr., and sisters, Marian Bigham, Mattie A. Cooper, Elizabeth Ellis and Frances Hassell. Mr. Bigham served in the Army for three years during World War II. He was a member of First Baptist Church, West Point, and was a deacon and choir member. He was inducted into the West Point Hall of Fame in 1992. Mr. Bigham was an educator and served as a principal in the Pontotoc schools. He served as principal and superintendent in the West Point schools. When he retired in 1976, he was awarded the title of Superintendent Emeritus. Survivors include his daughter, Virginia Ruth McCall, son-in-law, John G. McCall, III, and several nieces and nephews. Pallbearers will be Gene Bigham, Dr. John Hassell, Doug Hassell, Paul Savage, Gayle Savage and Sam Savage. Honorary pallbearers will be Frank Dichiara, Donald Permenter, Norman Armstrong, A. R. Parks, and members of the Bible Learners Sunday School Class. The funeral service will be held Saturday, August 11, 2012 at 11:00 a.m. at First Baptist Church in West Point, with Reverend Dale Funderburg officiating. Visitation will be Saturday from 9:30 a.m. until 11:00 a.m. service time at First Baptist Church. Burial will be in the Greenwood Cemetery. Memorials may be made to First Baptist Church Building Fund, P. O. Box 797, West Point, MS 39773 or to a charity of choice. Calvert Funeral Home of West Point is in charge of arrangements.

The family of Mr. Brawley Bigham created this Life Tributes page to make it easy to share your memories.

Send flowers to the Bigham family.