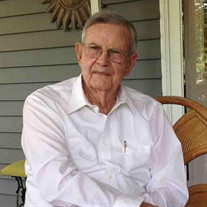 Mr. Pat Hudspeth, 88, passed away on October 6, 2017, at Beehive Homes of Starkville. Arval Pat Hudspeth was born July 13, 1929, in Louisville, the son of the late Martin Crowall and Mildred Annie Miller Hudspeth. Pat grew up in Louisville attending Louisville schools and playing football on a state championship team. After graduating, Pat drove a cab with his father before being hired by Southern Natural Gas. He married Annie Joyce Jackson of Sturgis in 1951, and they had a daughter, Sherre Ann. Pat spent almost 40 years with Southern Natural, moving many times across Mississippi, Alabama, and Louisiana. He and Joyce retired in West Point and made it their home for over 25 years. He was a faithful member of Calvary Baptist Church and a diehard Mississippi State fan. When he wasn’t tinkering around the house or driving country backroads with Joyce, he was attending a game with Sherre. In his last few years, he spent time laughing and storytelling with his friends and granddaughters. In addition to his parents, he is preceded in death by his wife, Joyce, and his daughter, Sherre, and his brother, Roger. Funeral services will be Tuesday, October 10, 2017, at 2:00 P.M. from Calvert Funeral Home Chapel with Reverend Roy Myers officiating. Miss Cary Ruth Denson will deliver the Eulogy. Burial will follow in Sturgis City Cemetery in Sturgis. Calvert Funeral Home of West Point is in charge of arrangements. Survivors include Two Granddaughters: Cary Ruth Denson of Boston, MA and Leslie Elizabeth Denson of Austin, TX Pallbearers will be Ricky Cole, Steve McBrayer, Chris McBrayer, Keith McBrayer, Daniel McBrayer, and Josh Coleman. Memorials may be made to Mississippi State University Athletic Association Bulldog Club, 288 Lakeview Drive #2225, Mississippi State, MS 39762. Visitation will be Tuesday 1:00-2:00 P.M. at Calvert Funeral Home. Friends may leave an online condolence at www.calvertfuneralhome.com

The family of Mr. Pat Hudspeth created this Life Tributes page to make it easy to share your memories.

Send flowers to the Hudspeth family.