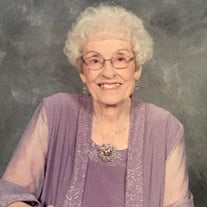 West Point, Ms-Peggy Ellis White departed this earth on July 14, 2020. She was 96 years old. She was welcomed into the arms in heaven by her Father and Mother, William Henry and Katie Lee Ellis, her husband, Irvin (Babe) White, her sister, Verna Lou Vickers, her brother-in-law, Thomas Vickers and her two sons, David L. White and Irvin Dale White. Peggy is survived by her daughter, Dixie White Shirley and her husband William (Billy) of Columbus, MS. She is also survived by her two daughters-in-law Sally Griffin White of Huntsville, Al and Ann Richard White of Natchez, MS. She had 21 grandchildren, 27 great grand children and 3 great, great grand children. Grand children include: Travis Shirley of West Point, MS and Katie Shirley Thurston and husband Shannon of Madison, AL., Katie White Calhoun and husband Marc of Alabaster, AL, John White and wife Cathy of Houma, LA, Elizabeth White Farmer and husband Gary of Natchez, MS, Joel White and wife Patsy of Milton, FL, Tom White and wife Heather, Aaron White and wife Deidra, Paul White and wife Amanda and Mary White Peake and husband Kirk of Huntsville, AL, Ben White and wife Rachel of Dublin, Ireland. Great grand children include: Matthew and Nathan Shirley of West Point, MS, Landon and Chase Thurston of Madison, AL, Dillon and Sierra Calhoun of Alabaster, AL, Caleb White and wife Beth, Sam White and wife Lori, Laura White and Eli White of Houma, LA, Trevor and Brock Farmer of Natchez, MS, Jansen White of Milton, FL, Jake Bradley and wife Arianna of Jackson, MS, Jesse Bradley and wife Brittney of Jacksonville, FL, Hayden, Daniel and Mason White , Callen White, Robert and Andy White of Huntsville, AL and Judah and Poppy White of Dublin, Ireland. Great, great grand children include: Elliott and Cecelia White of Houma, LA and Jack Bradley of Jacksonville, FL. Pallbearers will be her grandsons: Travis Shirley, Tom White, Ben White, Joel White, Shannon Thurston, Kirk Peake, John White, Marc Calhoun, Aaron White, Paul White and Gary Farmer. Honorary Pallbearers: Ron and Ann Jones, Allen and Virginia Crews, Bubba and Cathy Davis, Tommy and Jeannie Vickers, Ruth Fowler, Shirley Smith, all the members of her Sunday School Class at Calvary Baptist Church and the home health caretakers and all the health care workers who took such loving care of her. The family would like to make a tribute to our loving and special MawMaw. In memory of MawMaw from her family… Maw Maw started life as Peggy Ellis in Cairo, MS. She married our Paw Paw now becoming Peggy Ellis White and followed him during WWII to the California coast in San Diego. As part of the “Greatest Generation”, she became a Rosie Riveter building war machinery for our troops and our country. She was larger than life and everything for her was an adventure, because she lived life to the fullest. After helping the Allies defeat the Axis powers in WWII, she returned to West Point. There she raised a family, helped raise grandchildren, numerous great grand-children, and lived long enough to meet some great, great, grandchildren. She was active in the West Point community where she taught children, supported her church, and was a bed rock for her family. Maw Maw was tougher than boot leather and softer than the finest silk. They say that when we leave this world, riches are not based on money, but the kind memories and legacy you leave behind. So Maw Maw left her family a fortune! We could go on and on with the stories and the achievements of a life well lived. If you want to know her better, meet one of her family. The kindness in their voice and the passion in their eyes are all part of her. We all pray that we can impact the world in the ways that Maw Maw did. Our prayer: “Lord Father, we pray that you accept Maw Maw in your warm embrace. We cannot thank you Lord enough for the blessing you bestowed on our family with such a woman. Her life was lived with your glory shining through. Give us the strength to carry on her legacy as we keep her love and memories close. Amen. Thank you Maw Maw. We love you Maw Maw, tell everyone there hello for us. Till we meet again… Due to the ongoing virus, a celebration of life will be held later this year. We will let everyone know the details of that when the time comes. Due to current health concerns, a private family service will be held Thursday, July 16, 2020 in Greenwood Cemetery in West Point. Calvert Funeral Home is honored to be entrusted with the arrangements. In lieu of flowers, memorials can be made to Calvary Baptist Church, 282 McCord Street, West Point, MS 39773. Friends can leave online condolences at calvertfuneralhome.com. End copy

West Point, Ms-Peggy Ellis White departed this earth on July 14, 2020. She was 96 years old. She was welcomed into the arms in heaven by her Father and Mother, William Henry and Katie Lee Ellis, her husband, Irvin (Babe) White, her sister,... View Obituary & Service Information

The family of Mrs. Peggy Ellis White created this Life Tributes page to make it easy to share your memories.

Send flowers to the White family.