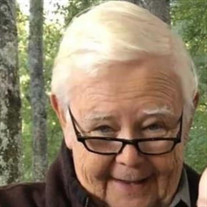 West Point, MS - Richard Wendell South, 73, was born on December 12, 1947 in West Point and passed away on May 23, 2021 at Baptist Memorial Hospital in Oxford, MS. He was the son of the late Wendell Edward and Bertha Coburn South. Richard married Lucille Lofton on June 7, 1968 in Cedar Bluff. He was a lifelong member of the First Christian church where he was an elder and taught the “90 and 9” Men’s Sunday School Class as well as sang in the choir. Richard was a loving husband of 53 years, a supportive father to his children and adored all of his grandchildren dearly. He was the owner of multiple businesses in town, B&S Cleaners for 25 years and Coburn Insurance Company for 22 years to name a couple. He enjoyed playing the trombone and had a general love for music. Richard was an inventor of sorts. He was known to buy all the components and build his own firearms. He will be greatly missed by all who knew him. Graveside funeral services will be Wednesday, May 26, 2021 at 10:00 am from Cedar Bluff Cumberland Presbyterian Cemetery in Cedar Bluff with Brother Eric Ross officiating. Burial will immediately follow.. Calvert Funeral Home of West Point is honored to be entrusted with the arrangements. Survivors include his wife Lucille L. South of West Point; one daughter, Elizabeth Hill of Hoover, AL; one son, Ed South (Amyli) of Wujiang, China; four grandchildren, James and Patrick Hill, Claire and Mason South; one sister, Marguerite "Cricket" Campbell of West Point. Preceding him in death were his parents and one son-in-law, Richard Hill. Pallbearers will be Will Foster, Jeff Foster, John Foster, David Foster, Tim Campbell, Zach Campbell and Stephen Harris. Honorary Pallbearers will be the Elders at the First Christian Church of West Point, Andy Naugle III and Terry Burns. Memorials may be made to Cedar Bluff Cumberland Presbyterian Cemetery, 703 Henryville Road, Cedar Bluff, MS 39741 or to First Christian Church, P. O. Box 208, West Point, MS 39773. Friends may leave an online condolence at www.calvertfuneralhome.com Calvert Funeral Home P.O. Box 77 West Point, MS 39773

West Point, MS - Richard Wendell South, 73, was born on December 12, 1947 in West Point and passed away on May 23, 2021 at Baptist Memorial Hospital in Oxford, MS. He was the son of the late Wendell Edward and Bertha Coburn South. Richard married... View Obituary & Service Information

The family of Mr. Richard Wendell South created this Life Tributes page to make it easy to share your memories.

Send flowers to the South family.