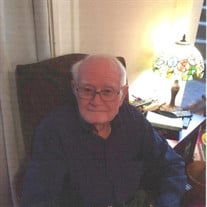 Mr. Tommy Hubert Davies, age 89, passed away the morning of Tuesday, April 14, 2020. He was born on November 4, 1930, in Seminole, Oklahoma to Thomas Henry and Sarah Short Davis. He graduated High School in 1949 in Bartlett, Tennessee. In 1949, Tommy enlisted in his beloved United States Marine Corps serving in Quantico, Virginia as an ordinance instructor. In 1950, Tommy was honorably discharged from the Marine Corps, only to be recalled later that year due to the Korean War. Serving most of that time in Quantico, Virginia as an armorer for a Motor Transport Company, he was honorably discharged again from Marine Corps in 1952. In the 1952 to 1953 school year, he attended what was then known as Memphis State College with aspirations of studying veterinary medicine. After working for the United States Forest Service in Montana in the summer of 1953, Tommy decided that he would rather study forestry. In the fall of 1953, Tommy’s parents had moved to West Point, Mississippi. Tommy followed his parents and enrolled in the forestry program at what was then known as Mississippi State College. He graduated with his degree in forestry in 1956 as a member of Sigma Phi Epsilon. Tommy held a number of temporary jobs working as forester in Texas before moving back to Mississippi. He worked for the Mississippi State Forestry Commission from 1960-1970 in DeKalb. In 1965, Tommy married Mrs. Paulette Williams Davies. The couple moved to West Point in 1970, and Tommy worked on a construction crew to build the Southern Natural Gas Construction Field. After construction was completed in 1971, Southern Natural Gas Company hired him as a full time employee. Tommy worked at the company until his retirement in 1993. Retirement not entirely suiting Tommy, he was hired by Calvert-Spradling Engineers to perform infrastructure inspections in 1995 until 2012. He was a member of the West Point Church of God. In addition to his parents, he was preceded in death by a sister, Patricia Davis McBryde. There are no services scheduled at this time. Calvert Funeral Home of West Point is honored to be assisting the family during this time. Survivors include his wife, Paulette W. Davies of West Point: son, Christopher Davies (Julienne) of Little Rock, Arkansas, and a granddaughter, Elena Ryland Davies of Little Rock, Arkansas. Memorials may be made to St. Jude Children's Research Hospital, 501 St. Jude Place, Memphis, TN 38105. Friends may leave an online condolence at www.calvertfuneralhome.com

Mr. Tommy Hubert Davies, age 89, passed away the morning of Tuesday, April 14, 2020. He was born on November 4, 1930, in Seminole, Oklahoma to Thomas Henry and Sarah Short Davis. He graduated High School in 1949 in Bartlett, Tennessee. In... View Obituary & Service Information

The family of Mr. Tommy Hubert Davies created this Life Tributes page to make it easy to share your memories.

Send flowers to the Davies family.