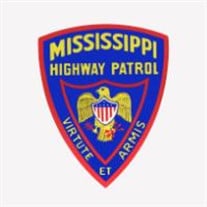 Mr. Wayne Grant Sikes, 79, passed away on February 2, 2022 at North Mississippi Medical Center in Tupelo. Wayne was born on January 27, 1943, in Guntersville, Alabama, to the late William and Virgie Murphy Sikes. Wayne joined the Mississippi Highway Patrol in 1968 and retired in 1990, after serving for 22 years. After his retirement, he was a over-the-road truck driver for Wal-Mart for 19 years. He was a Veteran of the United States Air Force, having served during Vietnam. He was a member of the West Point Masonic Lodge #40 F.&A.M. He was a fair man that enjoyed hunting, fishing, camping, and cooking for his family and friends. He enjoyed having a garden and was canning vegetables until his health started to decline. He was a loving husband, father, grandfather, brother, and friend. He married Sylvia Harmon Sikes on August 1, 1966, in Lowndes County. She predeceased him on April 29, 2013. He was of the Baptist faith. Graveside services will be on Tuesday, February 8, 2022, at 3:00 P.M. from Memorial Garden Cemetery in West Point with Dempsey Rowland officiating. Calvert Funeral Home of West Point is honored to be entrusted with the arrangements. Survivors include his daughter, Suzanne Odom of Columbus; two sons, Billy Sikes of Hamilton and Chad Sikes of Cullman, Alabama: seven grandchildren, Dustin Odom (Jacalyn), Anna Thomas, Drew Odom, Jackson Sikes, Grant Sikes, Bryce Sikes, and Abby Sikes: six great-grandchildren, Easton and Berklee Odom, Aubree and Aylvia Thomas, and Sylas and Paisley Householder: two sisters, Janet Carolyn Wesson of Mantachie and Ethel Marie Miller (Fred) of Maui, Hawaii, and a Sister-in-Law, Sandra King of Columbus. Memorials may be made to Wounded Warrior Project, P.O. Box 758516, Topeka, Kansas 66675-8516 or to the Donor’s Charity of Choice. Friends may leave an online condolence at www.calvertfuneralhome.com

The family of Mr. Wayne Grant Sikes created this Life Tributes page to make it easy to share your memories.

Send flowers to the Sikes family.